A Reflection on this Family Day

This Monday we celebrate Family Day.  Perhaps this year more than any previous year, this gives a chance to take a day, hopefully relax a little and spend time with those closest to us, and to get away from the stress of pandemics, restrictions, politics and protests.

This Family Day I would like to share my family's story. My family’s time in Edmonton began in 1923.  My great grandfather, Alban Cartmell, came to Edmonton from England to start a new life.  As an artist, Alban wanted to be closer to the Canadian Rockies and to paint those snow-covered landscapes.  He was a founding member of the Edmonton Art Society, and as Tony Cashman noted in his book “The Best Edmonton Stories”, was renowned for the “green” sky in his paintings.

While Alban’s main interest was the snow, he painted several cityscapes that I always found more interesting.  I have included a few here.  One depicts the building of the Alberta Legislature, which hung in my grandparents’ basement near my grandfather’s easel.  Another shows the construction of the high level bridge.  And the third shown here is the view looking south from 100 street, towards the MacDonald Hotel, showing the old post office on the current Westin Hotel site and the steps of the old library.  The place from which this painting was created was directly outside of my City Hall office window when I was first elected in 2017 - 90 or so years after Alban first set his easel up to paint this scene.

Alban bought a house in Rossdale, and owned a paint shop as well. In his late 70’s he was having lunch in a local diner when a gas explosion leveled the building. Alban survived, and lived and painted into his 80s.

Alban emigrated to Canada with his wife and five children, including my grandfather Bernard who was 16 years old when he arrived in Edmonton in 1924.  Bernard met his future wife, Violet when both were members of the choir at St. Joseph’s Catholic Church (now St. Joseph’s Basilica).  At that time, only the basement of the church had been built.  They bought the house next door to Alban’s, and started their family. 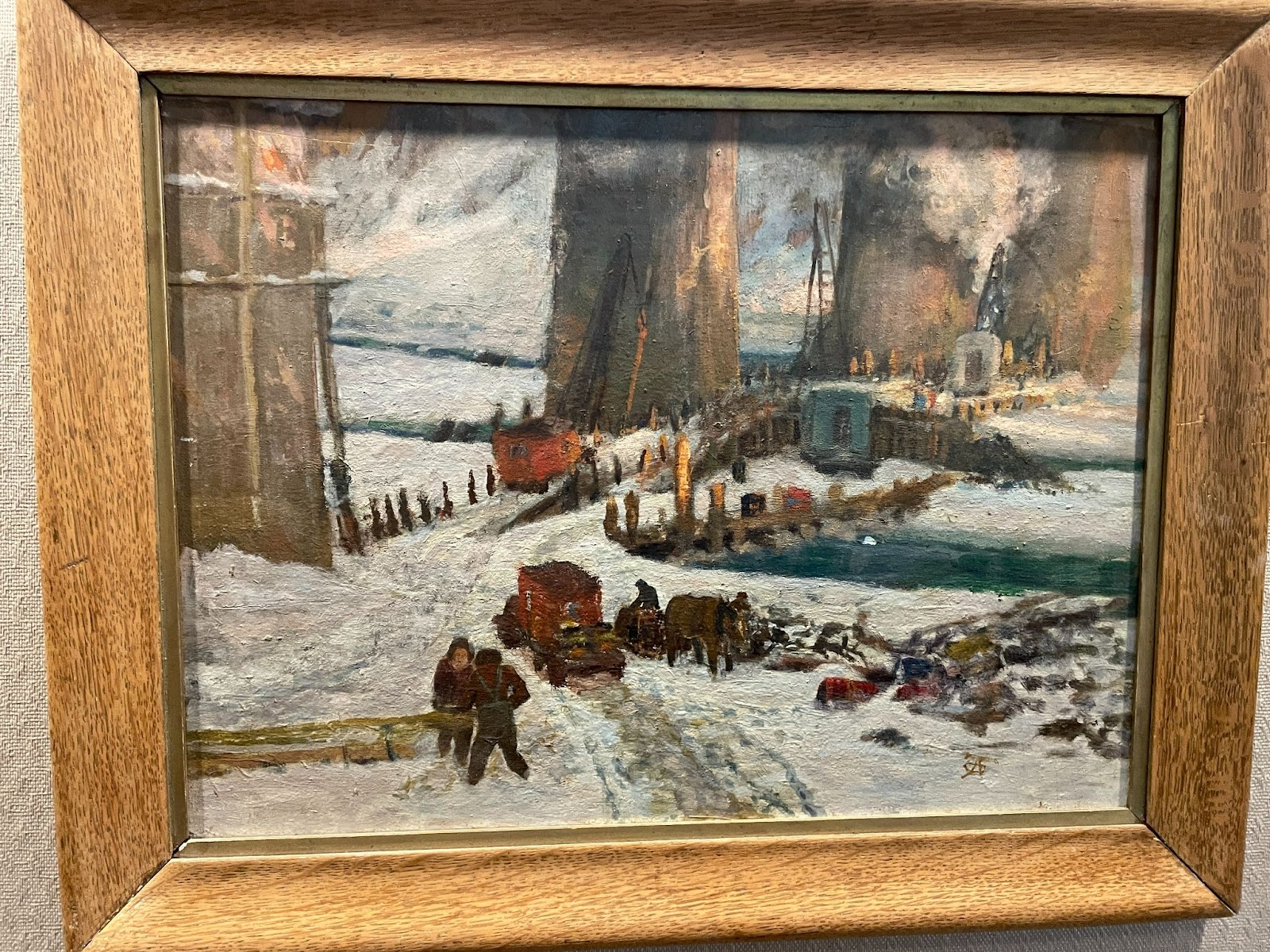 Bernard and Violet had four children, including my father, also named Bernard.  My future dad’s cousin introduced him to her best friend and my future mom Teresa. Courtship and marriage followed, then a year later I was born.  Those first few years we lived in the Princess Apartments on 118 Avenue, walking distance from my grandparents’ second and final home in Inglewood.  My dad was a teacher, my mom a nurse and then a librarian.

Alban’s paintings shown here now hang in my office at City Hall, a reminder of my family’s long history in Edmonton. From grandparent to parent to myself and now to my children, we have watched this City grow from a large prairie town to a small City to a small big City.  That literally lived history is wonderful to have available to draw upon in my current role.

I am also aware that this is a very stereotypical colonial settler experience and upbringing.  This story does not include a lot of interaction with Indigenous persons.  It speaks to a family experience largely oblivious to the experiences of others.  This story does not acknowledge that the properties my family owned in Rossdale were somehow part of a parcel sold by the Hudson’s Bay Company to the Dominion of Canada.  It makes no mention of the parallel experiences of others in Residential Schools, who had no opportunity to the rather idyllic and privileged existence my family has largely taken for granted.  I reflect frequently about what I know now, that I didn’t know then. I continue to listen,  learn and reflect to better understand our communities' path to Truth and Reconciliation.

I am proud of my family heritage, and of the contributions my family has made to this community. I am glad for this day to reflect on our collective journey, but mostly to spend time with my wife, my kids and my extended family.  I am thankful that I have the strength of that family to draw upon while trying to contribute to the governance of an ever-evolving City. I hope you all have people in your life, whether family or friends, that provides you with support.