On February 26, 2020, the Community & Public Services Community will have another conversation about roads with an emphasis on reduced speed limits. This proposal is to reduce all residential speed limits to 40 kph, or reduce limits in core neighbourhoods to 30 kph, or both.  Either approach would require millions of dollars to put up thousands of signs.

I don’t support either idea.

There have been some very tragic incidents involving vehicles and pedestrians that have resulted in injury or death. It is these incidents, in part at least, that compel us to take action.

Some believe that drivers generally go too fast, that we should reduce speed limits to avoid tragic outcomes and to activate or enliven our streets.

While these are important goals, I think this is an over-simplification.

Speed limit signs are passive.  They become part of the landscape.  They don’t change driver behaviour. And these particular speed limits will tell most people to do what they are already doing.  Speed studies done by the City show that most people are going 40 kph or less most of the time, on these roads at least. 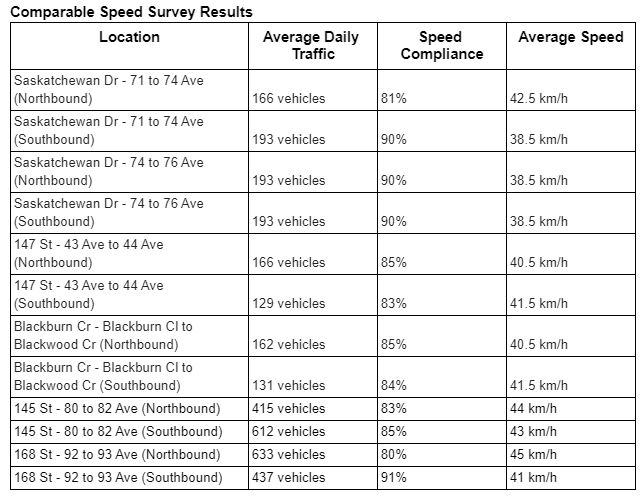 People generally drive at a safe speed based on conditions at the moment.  And based on recorded behaviour, that speed on Edmonton’s residential roads is already about 40 kph.

Rather than spend millions on signs, I would rather that we spend that money on solutions that will address the actual problem.  What is it we can do to force that small number of non-compliant drivers to obey the law? Is it speed bumps? Is it crosswalks?

I have continuously spoken in favor of positive improvements, such as improved crosswalks and better street design, instead of speed limit reductions.  We need to put our resources into places where vehicles and pedestrians and bicycles conflict, to make those interactions safer. Extra attention to crosswalk improvements will make a real difference for Edmontonians.

I think that active and lively streets have more to do with people having far less spare time than they used to.  I think it is affected by far more front garages than before. And in the suburbs, it is a result of long, wide, curvy roads and a lack of sidewalk connectivity between neighbourhoods.

But what will it do?

It will create even more confusion.  Roads can already be confusing with similar looking roads having different speed limits.  If we proceed with the recommended change, we will end up with 30 kph, 40 kph and 50 kph limits at the same intersection.  Confusion leads to frustration, and potentially bad driver behaviour.

It will cost money.  Millions of dollars for thousands of signs, all telling drivers to do what most of them are already doing.  Money that could be spent on crosswalks, or other street improvements that do add to safety.

It will build resentment.  Drivers in Ward 9 have said that they feel the City does not trust them to be safe, that there is a war on cars.  Proceeding with a reduction in residential speeds when the vast majority of drivers are already driving safely and under the limit will build resentment but will not result in compliance or better behaviour.

Are there places that need a limit?  Roads adjacent to a neighborhood that are too busy to be safe and need a lower limit?  Select places where a speed reduction zone will aid a driver in anticipating risks? Yes, so let’s identify those few places and fix them.

But a general reduction in speed limits will not result in any change in vehicle speeds.  It won’t make streets safer, or more active. It will only cost us money for a lot of signage.  It is another exercise in a misplaced blanket solution that does not address the actual problem.

Let’s spend our money on wise investments that address the real problems and will achieve real results.