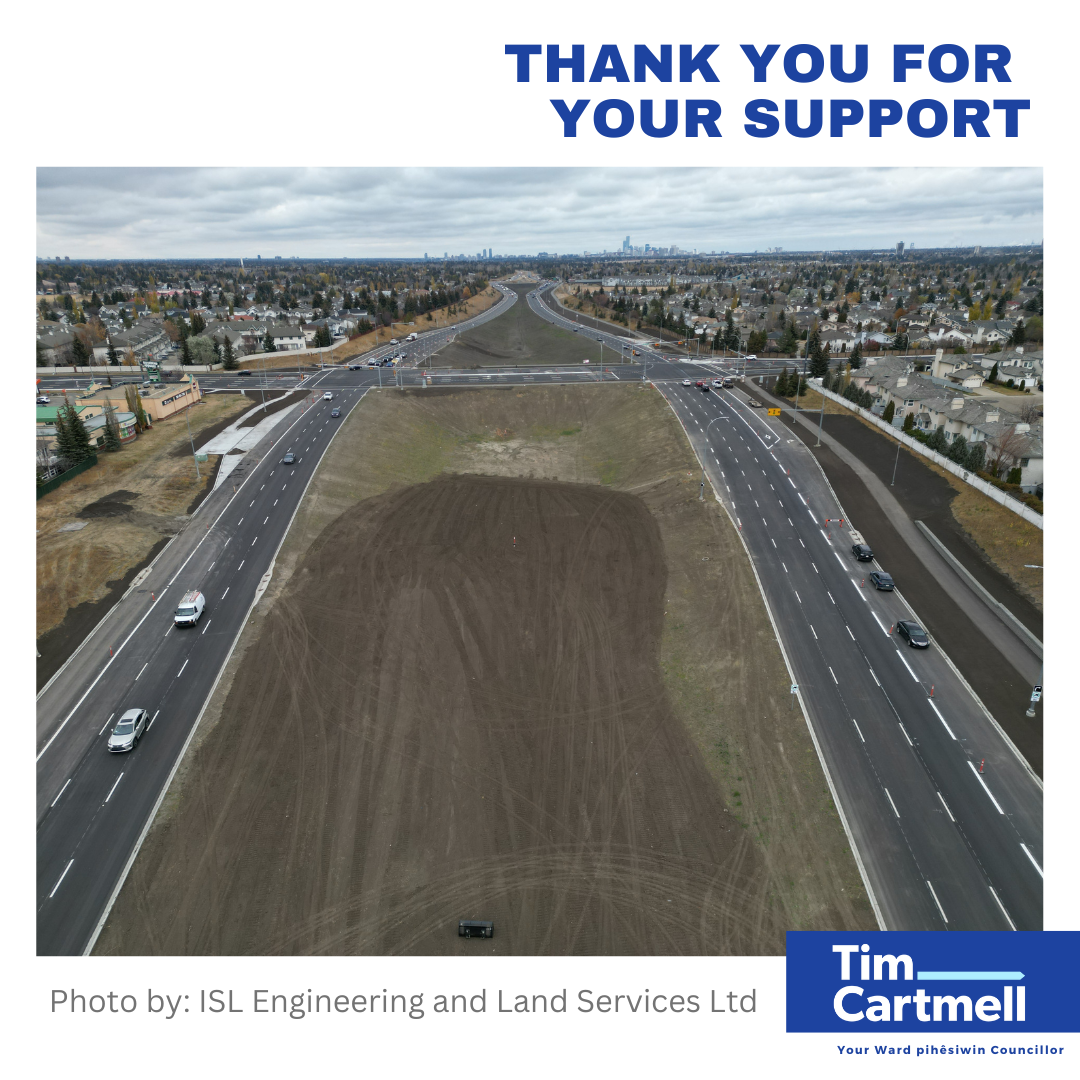 I want to thank everyone who took the time to express their support for the continuation of the Terwillegar Drive Project. As of this writing, no budget amendments have been put forward to pause this project or remove funding. My Council colleagues heard from a large number of southwest Edmonton residents, with the consistent message that this project must proceed. It appears they have taken that message to heart.

As I mentioned in my previous blogs, and as I have consistently stated for years, the Terwillegar Drive project is not just a road project, and it is NOT A FREEWAY. It is a multi-modal mobility project, one aimed at providing all modes of movement to the deep southwest, while eliminating significant safety concerns on the current road system. It is the first and only project undertaken by the City to build all three modes of transportation.

I want to share some of the comments I received over the last week:

“My concerns are that the Whitemud westbound ramp that curls under and leads to Terwillegar southbound is extremely unsafe. This lane backs up onto Whitemud during the evening peak traffic times, leaving drivers stationary and very vulnerable, in what I understand is the fast lane of the Whitemud.  I personally feel very unsafe in a slow-moving  or stationary vehicle when vehicles behind approach at 80 kph or more. This primary spot for afternoon collisions on the Whitemud has been known for decades.”

“There were countless public engagements in the attempt to bring the public on board with the City’s plan.  Changing the project halfway through without the same level of public engagement feels like a bait-and-switch  tactic.  Didn’t these public meetings mean anything?”

“Considering that Terwillegar now stretches from Whitemud to Keswick, it has to be considered a major part of Edmonton's traffic system, one that will only see more usage in the future. Compromising the long-overdue improvement project will not solve problems - we believe it will ultimately create more.”

According to the 2019 census, there were 23,078 residents south of Anthony Henday Drive in the communities of Windermere, Keswick, Glenridding and Ambleside. In the last four years, we have seen many more people make the communities south of the Henday their home.

These communities are the most densely populated outside of downtown. They are also the most affordable, far more affordable than Oliver or Blatchford. These neighbourhoods  are incredibly diverse, filled with new Canadians  and new families.

There are no city amenities. No recreation centres. No arenas. No pools, no libraries, no splash pads or skateboard parks.

The collective message - so far - is clear. If you want any of those things, get in your car and drive to another community to find them.

I want to change that.

That work starts with bringing transit and active transportation to southwest Edmonton. The same mobility investments that every other corner of Edmonton has already received. Terwillegar Drive does that.

Development of southwest Edmonton needs to continue with small-scale recreation, a library, schools and other communities that complete a community.

And it needs to include building communities in a more sustainable way. More energy-efficient buildings. More district energy systems. Electric and hydrogen-fueled transit and service vehicles. Housing with income supports. More support for solar panels and energy upgrades for your home. And yes, more bike paths and more transit.

How do we move forward to address some or all of these demands in a meaningful but balanced and equitable way?

That’s what I want to talk about. I know not all of you agree on all of this. That’s why our conversations are so important, now more than ever.

It is these next challenges that I want to work on. Let’s get going on those things. And let's not hesitate to remind the rest of Edmonton that we are moving on to tomorrow, and they should too.